Welcome to the home of Jon Myers, The World’s Best Mediator

Find, develop, and assert your basic goodness, and change your life

My story, and for that matter the World’s Best Mediator and the Science of Inner Strength, begins, with of all things, emotional abuse….well AND the response to it. My understanding of emotional abuse, is the key by which a world of understanding was opened up to me. I call my story a Biblical level story, and as I share, you will potentially begin to agree with me.

It begins like this: I was raised in Scranton, PA. The first son of two prominent, and eventually very prominent people, Morey and Sondra Myers. Within a six or so block area, lived my four grandparents, our elementary school, and even Temple Israel. Things seemed very close-knit, walking to school, sports, visits with our grandparents. In short growing up in Scranton, in the years I did, as for instance, President Joe Biden notes was an intensely formative experience, my own especially so, given the degree of parenting, and extended family, with strict values that I experienced.

Part of my message is that a good part of our initial emotional fabric, can be determined by our growing experience, and our parents, for better or worse, may leave a huge imprint upon us. For the most part I saw my raising in a positive light. Then in 1988, a perfect storm of events occurred. My younger brother David Nathan Myers, living in Los Angeles, and his wife Nomi Maya Stolzenberg, initiated a psychological assault on my life. Something in hindsight, I viewed as an actual psychopathic type of attack. In addition, I went through a temporary marital separation from my then, now late wife Margaret Carney, which shattered in a way the emotional stability, evidently false at that of the family. Finally, my Grandfather Morris B. Gelb passed away, leaving an estate of about $10 million. My parents, Morey and Sondra Myers joined with my aunt and uncle, the late Jerome and Beverly Klein of Scranton, and also Attorney Richard S. Bishop, of Hourigan, Kluger and Quinn, to handle the estate inappropriately, dramatically understating the value to the IRS.

“Oddly” to use a word my daughter was to use, in a major college entrance essay and successful for that matter; the net effect of those three events of 1988, was to create this typhoon-like effect of emotional energy, virtually ALL directed at me. Given that I had been raised, with a sense of benevolence, I had really never heard of such a thing, of assaulting and scapegoating in such a way. For some, reason, rage arose in my family, and it was virtually ALL directed at me. This dynamic, like an iceberg, check out my book “Iceberg: Exposing Psychopathic Behavior and Restoring our Humanity on Amazon.com” was the beginning what I call an extreme narcissistic or even psychopathic assault.

What I wish to convey as far as emotional abuse is both its incendiary nature, as well as its basic assault on a human being’s mind and soul.  Understanding emotional abuse gets at the notion of why people hate in the first place? What are the roots of negativity?  People acting in harmful ways, essentially have no inner strength or spiritual center of their own. By spiritual center, I mean a sense of decency, care, self-respect, whatever it be. When we are full enough inside with something positive, we have little need to engage in negative behavior with other human beings. 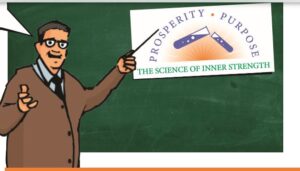 Much of what people engage in, with respect to condescension, on-line vitriol, and other forms of negative behavior, really have to do with people attempting to pull themselves up, by tearing another person down. That is why this is a teaching point to me. Let us accept the notion that most people legitimately want to be successful, be seen and heard and all of that. The problem is we are teaching people to be fearful; and the sense that the way to get ahead is to attack another, rather than developing their own positive creative way of influencing society.

The Science of Inner Strength

That is where the Science of Inner Strength comes in. It is about developing our own resilience, determination, even calm to develop higher goals within us, truly interdependent ways of getting there, along with a resilience to overcome obstacles. Going back to my story, and why I believe it is unfathomable, is because the very people who raised me, with mainly altruistic values, became the very people to emotionally and psychologically come up my throat. My own growth and development has allowed me to foster feelings of forgiveness and encouragement to those folks, because no none could act so ludicrously unless one person potentially my brother David was deeply disturbed and others were confused by the dynamic.
What I am getting towards is for whatever the roots, the situation provided the opportunity for me to develop my inner strength in profound ways. Here is how: Because I was hit with things so foreign to me, later factor in things like divorce and family court, and all…and I knocked down and so directly challenged, it gave me an opportunity to determine what I really believe.

You know the expression, a diamond was coal under pressure. Interestingly, I come from Scranton, PA, old anthracite coal country. The point being, when so many people come at you, and challenge you to your core, you decide. You either are beaten down by these people and/or situations or your find, in essence finding your inner strength. So, my inner strength was like most of us, oriented in my beliefs, my beliefs as a father in providing care and direction for children, my beliefs in fairness and equality, my beliefs in my own success and so on. Suddenly these very things that I took for granted were imperiled, if not snatched away from me, certainly at an emotional level, along with financial and practical consequences. It is at that moment, and set of moments that you decide who you are going to be. You realize that things you took for granted, will now, only come about through an amazing effort, fair or not.
Menu